Bilirubin Encephalopathy (BE) is an important cause of morbidity and mortality throughout the world, especially in low-middle-income countries where it accounts for up to 15% of neonatal death. The pathophysiology of this

The objectives of our study are to specify the epidemiology of bilirubin encephalopathy and kernicterus in our context, to identify the risk factors and the etiologies in Morocco.

This is a descriptive and retrospective study. It is carried over 70 months (January 2015 – October 2020) at the neonatal intense care unit of the Mohammed VI University Hospital in Marrakesh. It concerned 40 neonates with hyperbilirubin encephalopathy who were hospitalized for jaundice associated with one or more neurological signs (somnolence, hypotonia, lethargy, opisthotonos, convulsions…). Medical records were analyzed for demographic details of patients (age, sex), clinical and paraclinical aspects, treatments and evolution.

Table 1: Distribution of patients according to risk factors.

A history of neonatal jaundice in siblings was noted in 10 neonates (25% of cases). And there is a history of death in siblings in 20% of cases, the cause of these deaths was not mentioned on the files except in 3 cases where jaundice was reported as the cause. The onset of jaundice was in 30% of cases before 24 hours of life, 55% of newborns presented jaundice between 24h and 72h. While only 15% of cases showed jaundice after the third day of life. The average duration of jaundice before admission was 3 days with extremes ranging from 1 to 17 days. The initial symptomatology was dominated by jaundice (100% of cases) followed by neurological signs (refusal to suckle in 25% of cases and seizures in 20% of cases). Neurological signs were present at admission in 85% of cases dominated mainly by hypotonia and lethargy (Table 2).

Table 2 : Distribution of patients according to clinical signs.

Biologically, total bilirubin at admission ranged from 350 to 1103 µmol/l. Hemolysis was found in 18 patients (45%). The O+ blood group was the most common among mothers followed by Rhesus+ group A. The majority of newborns included in our study had A+ grouping. The direct Coombs test was positive in 12 cases.

The Cytobacteriological Examination of Urine (ECBU) required in 30 neonates and was positive in 16 cases, urinary tract ultrasonography requested in all patients who had a urinary tract infection, did not reveal abnormalities.

The therapeutic approach of our patients was aimed at an etiological and symptomatic treatment. Thirty-eight newborns received phototherapy (95%), of which 22 were intensive. Two neonates did not receive phototherapy

The evolution was, in the short term, good for 06 newborns (15%). We deplored 20 deaths (50%) and the long-term evolution was marked by neurological sequelae (kernicterus) for 14 patients (35%) (Figure 1). The average duration of hospitalization was 4.5 days with extremes of 1 and 17 days. 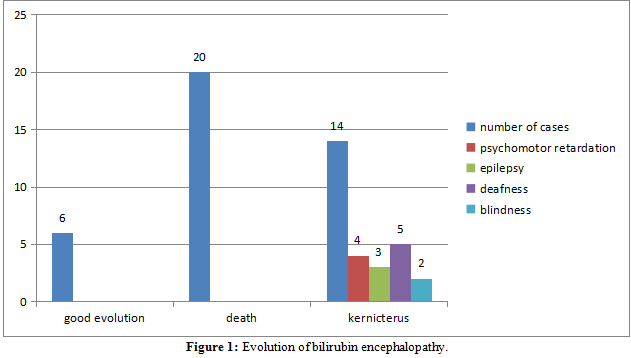 Kernicterus also known as chronic bilirubin encephalopathy, describes the chronic, toxic, and permanent sequelae of high levels of unconjugated bilirubin on the central nervous system of infants [7]. A tetrad of clinical features that are typically evident after one year of age: (i) abnormal motor control, movements, and muscle tone; (ii) an auditory processing disturbance with or without hearing loss; (iii) oculomotor impairments, especially impairment of the upward vertical gaze; and (iv) dysplasia of the enamel of deciduous (baby) teeth [4,8].

Globally, bilirubin encephalopathy is one of the most important preventable causes of neonatal mortality and brain injury [9].

Most incidence studies are based on registries of reported cases with sometimes different definitions. In Great Britain, an incidence of 7.1/100,000 cases of indirect hyperbilirubin has been reported ≥ 510 μmol/l [7]. In Denmark, a rate of 45/100,000 ≥ is found in newborns with a total bilirubin level > 450 μmol/l [10]. In both

In Morocco, the incidence of neonatal jaundice in general and that of bilirubin encephalopathy remains unknown, due to the lack of a national registry. during our study period bilirubin encephalopathy affected 40 neonates, a frequency of 3.8% of all newborns admitted for neonatal jaundice (1052 neonates) and 14 patients who developed Kernicterus (1.33%).

The precise mechanisms of the toxicity of bilirubin on the brain are still not fully understood. However, all newborns are not equal when it comes to hyperbilinemia [1].

Acute bilirubin encephalopathy can be subtle requiring a high index of suspicion, or apparent with overt neurologic abnormalities. [1]. Its development is marked by three distinct phases: The first is characterized by poor sucking, hypotonia and weak Moro. The Second phase is hypertonia with extending muscle spasms, opisthotonus, which may alternate with periods of hypotonia, fever and high-pitched cry are often associated. In some cases, we can see food refusal, apnea, stupor or coma and a progression to death. The third hypotonia phase begins at the end of the first week of life In this phase, deep stupor or coma, high pitch crying, pronounced retrocollis-opisthotonos, and no feeding is observed. The clinical features of encephalopathy in preterm neonates are the same as term neonates but more subtle, mainly due to neuronal immaturity and masking clinical conditions [1]. Recognizing these signs early is essential for rapid and appropriate treatment.

Kernicterus is a more chronic and permanent clinical sequel of bilirubin toxicity in neonates who survive Acute bilirubin encephalopathy. In the early phase, which occurs in the first year of life, it usually presents with hypotonia, hyper-reﬂexia, persistence of tonic neck reﬂex and delayed milestones [14] After the first year, the manifestation is more variable, with a tetrad of symptoms including auditory, visual and dental abnormalities, and extrapyramidal disturbances. Bulbar functions may also be impacted [1,14].

T.M. Shapiro proposed a classification of the sequelae of acute bilirubin encephalopathy to classical kernicterus;

refers to people with the classic triad or tetrad. Kernicterus predominantly motor and kernicterus with predominance of auditory sequelae [5].

Caffeine is encouraging for the prevention and treatment of bilirubin neurotoxicity in rats due to its anti-apoptotic, antioxidant, anti-inflammatory, anti-nitrosating and anti-TLR-4 properties [15].

For the prevention of kernicterus we have proposed these recommendations:

Severe hyperbilirubinemia accounts for only a small proportion of neonatal jaundice, but they are nevertheless responsible for definitive sequelae (nuclear icterus) in the absence of screening and adapted management. It is a scourge in Morocco given the problem of access to care and the delay in care.

Copyright: © 2021 Soumia Mrhar et al. This is an open-access article distributed under the terms of the Creative Commons Attribution License, which permits un-restricted use, distribution, and reproduction in any medium, provided the original author and source are credited.