Stereotactic radiosurgery (SRS) and stereotactic body radiotherapy (SBRT) have an established but evolving role in the management of malignant and benign condition.

Swedish neurosurgeon Lars Leksell is pioneer in the development of stereotaxy’. In 1951 he coined the term “radiosurgery” and is recognized as the father of radiosurgery.

SBRT developed about a decade later than SRS, but was based on similar principles. Swedish physicist Ingmar Lax and radiation oncologist Henric Blomgren, both at the Karolinska Hospital in Stockholm, were very familiar with the brain SRS procedures being carried out in their institution. They reasoned that similar local control outcomes could be achieve at non-brain body sites with one or a few focally delivered fractions, even if targeting and immobilization issues for non-brain sites were more much complicated [1].

Stereotactic body radiotherapy (SBRT) is defined as a method of external beam radiotherapy (EBRT) that accurately delivers a high irradiation dose to an extra cranial target in one or few treatment fractions. The combination of Chemotherapy and Radiotherapy is an effective modality for treatment of lung metastases in pediatric tumors.

(SBRT) delivers high doses to achieve ablative treatment in 1 – 5 fractions, while sparing the volume of heart and lung irradiated. In adults local control after SBRT is reported to be more than 90% for pulmonary metastases which was demonstrated in a prospective study / Multi-institutional phase I/II trial of stereotactic body radiation therapy for lung metastases [2,3].
Our single institutional experience in 2 patients who received SBRT for lung metastases in pediatric tumors is presented in this article.

Two pediatric patients (age under 21) were treated with SBRT for lung metastases in our institution between years 2018. And 2022.

Parents of both patients gave their consent for performing SBRT for lung metastases.

For each patient, 4D-CT simulation for respiratory motion assessment or DIBH was performed, as well immobilization
and CBCT verification of each fraction. Treatment planning utilized Eclipse (Varian Medical Systems) with 5 mm PTV expansions and was delivered with X rays -6-MV photons on a Varian Edge machine. The critical structures as organs at risk (OAR) that were used for treatment planning: lungs, esophagus, ribs, heart, spinal canal, proximal trachea and large bronchi. Selected treatment plan of 6-year-old female patient is shown in Figure 1. 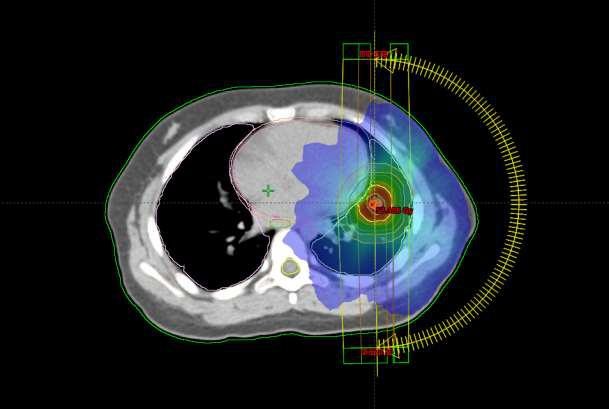 Figure 1: SBRT plan 6-year-old female patient, lung metastases diameter of 10mm near left ventricle. Colors on the figure show dose distribution – Red is dose maximum and the other colors represent dose fall off towards critical structures – healthy tissues.
Conformality index ranged from 0,082 to 0, 99. Regarding guidelines for SBRT dose regime in pediatric population do not exist; treatment planning was conducted according to guidelines for lung SBRT in adult patients. PTV received 95 % of prescribed dose. Patients are alive at this moment with complete control of disease in lung.

Six-year-old female patient with hepatoblastoma was treated previously with surgery and chemotherapy. She was referred to our clinic after disease progression – high level of AFP and single metastasis in the left lung. We delivered a dose of 50Gy in 5 fractions in June of 2020. Since then she has been on follow up with CT and PET/CT scans without relapse of disease. No side effects were noticed.

Second patient with hemangioendothelioma, had three lines of chemotherapy, 3DCRT radiotherapy for primary tumor on the right leg with 60Gy in 20 fraction followed by three courses of SBRT treatment of seven bilateral lung metastases, SBRT for bone metastases in cervical, thoracic and lumbar spine and thoracic wall soft tissue metastases and metastases in femoral regions of both legs and radiotherapy with Arc technic for neck lymphadenopathy. At this moment the patient has no new metastases in lung, but he has progression of disease in lower leg region.

A both patients had complete response for all treated lesions. There were no side effects in either patient in 27 months follow up.

For adult patients with limited metastatic disease, SBRT is a good treatment option for pulmonary metastases [4]. Reports of SBRT for pediatric lung metastases are limited to 3 patients with Ewing sarcoma (age 14–19) [5]. Deck J,11), additional histology, and feasibility to treat multiple lesions in a single course. Local control was achieved in all treated lesions at 2–4 years follow up, including for Wilms tumor where isolated pulmonary disease was successfully salvaged with SBRT. Importantly, severe acute treatment related toxicity was not observed in our patients despite previous treatment including chemotherapy, whole lung radiation, or multiple lesions treated [6]. As Deck and all demonstrate in their paper for favorable histology doses of 35-40 Gy in 5 fractions were sufficient, but with more aggressive tumors the dose given needs to be comparable to the adult standard dose of 50 Gy in 5 fractions [7].

An optimal SBRT dose regimen for is not known in pediatric population at this moment. Certainly it most likely differs from adult SBRT regimens. Paucity of data the increases risk of severe toxicity with lung SBRT in the pediatric population. The impact of SBRT on overall disease progress is also not clear. The place of SBRT in relation to surgery/systemic therapy and/or whole lung radiotherapy needs to be better defined.
SBRT can be considered as an alternative to surgical resection in appropriately selected patients.

Regarding the lack of data of using SBRT in children and reports of acute/late toxicity, the definitive, safe ablative radiotherapy doses of radiation in children is yet to be defined.

Copyright: © 2022 Dr Seha B. This is an open-access article distributed under the terms of the Creative Commons Attribution License, which permits un-restricted use, distribution, and reproduction in any
medium, provided the original author and source are credited.

*Department in Neurosurgery Clinic in University Clinical Centre of Serbia